History Of Our Church

Debretsion Medhanealem Ethiopian Orthodox Tewahedo church of Chicago, was established in 1975 under the leadership of the very Reverend Fr. Michael N. Taffesse and several migrants of Ethiopian origin residing in Chicago. It was during a stressful time in the mid 70s, himself migrant from Ethiopia with a mission to further expand his academic horizon in Theological studies affording him graduate level Masters and PhD degrees that father Michael succeeded in a handful of Ethiopians joining him to establish a place of worship or a spiritual group meeting to the least. That beginning, which progressively developed and expanded to enable growing number of Ethiopians in the Chicago area for worship on Sundays and religious holidays and for prayers and fellowships, with Fr. Michael single handedly performing the services, with the good Grace of God culminated 25 years later into a church building that the congregation was able to purchase and own. Fr. Michael renamed the church “Debretsion Medhanealem Ethiopian Orthodox Tewahedo church” with an interpretive significance of the earthly church, Debretsion preparing mankind for the Devine home Debretsion in Haven.

This is surely an occasion aimed at all present and past members of the congregation, friends of the church and members and leaderships of all Ethiopian Orthodox Tewahedo faith and other sister churches joining together to honor and celebrate Fr. Michael. In his dedicated 40 years of service to the community as leader of the church, performing numerous tasks, no less than 4 days a week, counseling families, blessing and comforting the sick and the disabled, praying for the deceased and participating in many community settlement and building programs he has indeed answered his calling.

The congregation of Debretsion Medhanealem of Chicago is indebted to Fr. Michael for the forty years of his tireless service each time conveying the Lord’s message of three simple words “Love one another” each time in his preaching. The congregation is overly delighted as well that our guests and members of sister churches from Cgicago and other states who join us every year to celebrate annual Medhanealem day take valuable extra time to meet Fr. Michael and engage in nostalgic chats with him about the good old days in Ethiopia himself as their former teacher or in high spiritual leadership capacity. 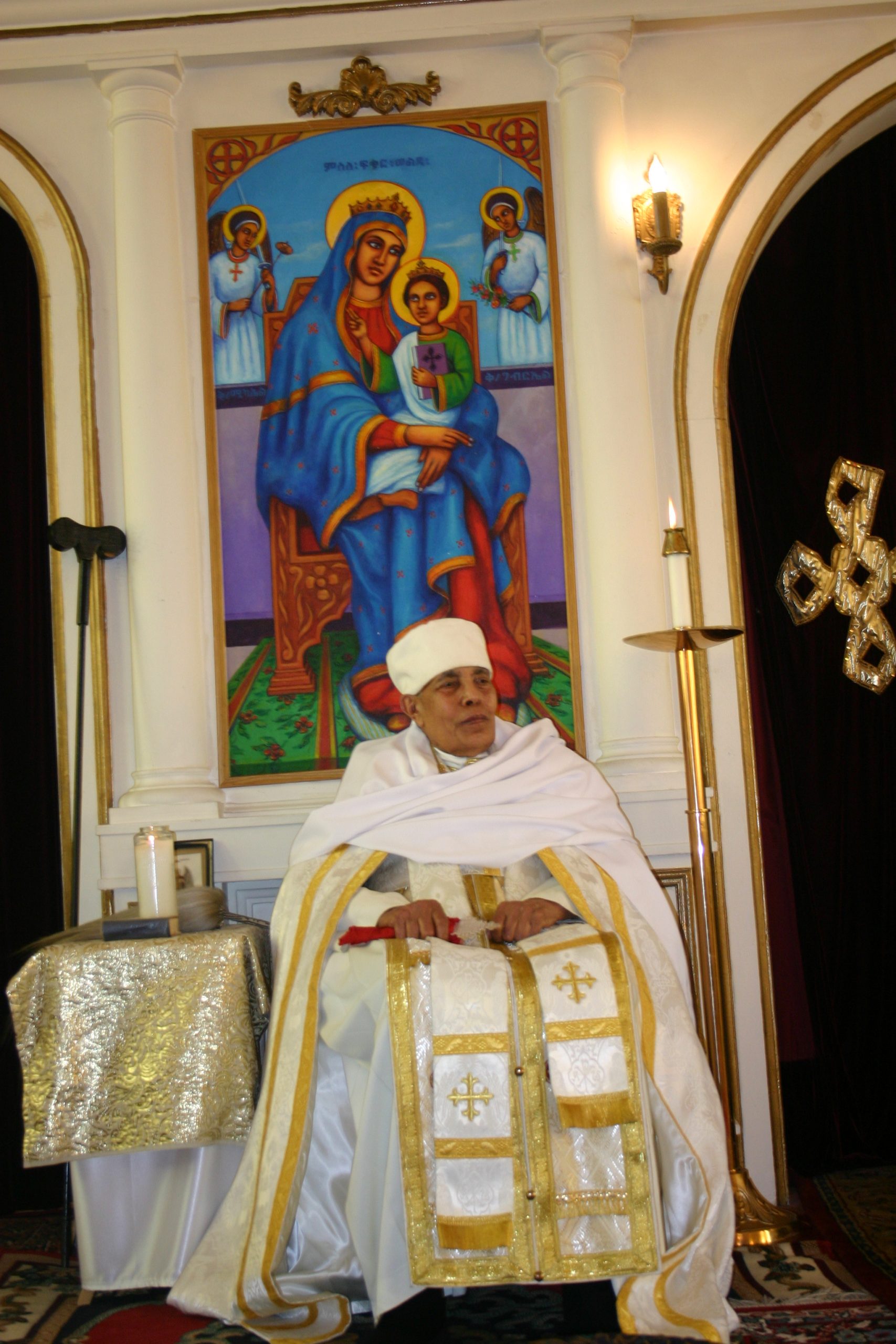 1982 -1983 – St. Mark’s Egyptian Orthodox church in Rosel, on west suburb of Chicago permits Fr. Michael to use its church for some services and on certain religious holidays. The first baptism of a child and the first wedding service performed.

1983-1984 – Garret Seminary of North Western University permitted us to use their facility for Sunday morning service. We took turns to organize the children and teach them the prayers “our father in Heaven” in Amharic while service was going on. Only space available was the basket ball field – some of the amateur self made Sunday school teachers did not mind the prayer session did not take long – filled up their time with a basket ball game; gained much popularity by the kids.

1984- 1998 – Dr. Lawndale and Dr. Perry both in leadership of the United Methodist Church helped us obtain permit to use the United Methodist Church in Evanston for Sunday service as soon as it was vacated by Christian Indians. Services were shorter because of facility constraints and every Sunday rods had to be secured for hanging curtains for the service to proceed including baptisms to be performed. By this time the population of migrant Ethiopians has grown multifold and the church has established organized committee members including a board. and later on a task force committee. Every summer our church participated in the Evanston summer cultural events held by the lake both for cultural show and sell of food items for fund raising for the church. Every year we made less than $2000.00 in that project, an amount by far exceeded by labor and material expense incurred. Our children and many of us adults however, enjoyed the outing and sampling of various types of food from diverse cultures and purchasing of souvenirs.

1997-1998  – The board invited leaders of some of the churches that appeared sensitive to immigrant settlement for a get together and advice on how to be able to own a church building. Prepared typical Ethiopian food and started our presentations and discussion. We were still with the mindset that big churches would give away small buildings for church or at least for very low price. We learned a better lesson from the meeting that a church established through ones own efforts and allotment of funds will gratify one most. Our advisers left us with some more wise words “never deny your members the pleasure of making a contribution, however little it might be”. This last piece of advice was following statements in our discussion that our advisers heard repeatedly that our people do not earn enough to make contributions.

1996-1998 – Became more serious about purchasing a church building and asked members to look around and check the papers. Many visits to churches on sell and talks to sales agents and owners ensued for a couple of years. Appointed a committee, that organized themselves and started planning a fund raiser. Wrote a letter to Dr. Ephrem Yisehaq, professor of Semitic culture and religious history in Stanford University to be the keynote speaker. The committee did a fantastic job and the fundraising dinner held at the first Methodist church in Evanston on June 6 1996 turned out remarkably successful.

1998 – Among the churches we visited, and yes we visited many in groups of two, a church building on 9805 S. Commercial that was vacated by St. Michael, the Archangel Serbian Orthodox church was much appealing to most of us and the set up was exactly fitting the requirements of our services as well. A few had their doubts because of a thought that the church may not be in a safe neighborhood. A research at the Harold Washington library proved that the church was in a neighborhood safer then and still is than around where we were looking for a building on the North side where most of our congregation members resided.

April 1998 –  church on 9805 S. Commercial was purchased with an adjacent church school and a parking area across the street.

1998-2014 – The church was built in 1926 by the Serbian immigrants when they settled in the area and when the large extended area used to be called steel city because of the lucrative steel industry in the area then. Though the church building required periodic repair, paint and maintenance job and new heating and cooling units and a total new roofing was a requirement, it has fully accommodated spiritual needs of the congregation and has remained a true place of worship keeping us together as a family in God.

We are all overly thankful to our Lord Medhanealem, for blessing our church community and keeping it grow both in number and in our aspirations to love one another and perform duties that signify the very essence of the significance of establishment of the church.